The carbon dioxide laser (CO2 laser) was one of the earliest gas lasers to be developed. It was invented by Kumar Patel of Bell Labs in 1964,[1] and is still one of the most useful. Carbon dioxide lasers are the highest-power continuous wave lasers that are currently available. They are also quite efficient: the ratio of output power to pump power can be as large as 20%. The CO2 laser produces a beam of infrared light with the principal wavelength bands centering on 9.4 and 10.6 micrometers (μm).

Because CO2 lasers operate in the infrared, special materials are necessary for their construction. Typically, the mirrors are silvered, while windows and lenses are made of either germanium or zinc selenide. For high power applications, gold mirrors and zinc selenide windows and lenses are preferred. There are also diamond windows and lenses in use. Diamond windows are extremely expensive, but their high thermal conductivity and hardness make them useful in high-power applications and in dirty environments. Optical elements made of diamond can even be sand blasted without losing their optical properties. Historically, lenses and windows were made out of salt (either sodium chloride or potassium chloride). While the material was inexpensive, the lenses and windows degraded slowly with exposure to atmospheric moisture.

The most basic form of a CO2 laser consists of a gas discharge (with a mix close to that specified above) with a total reflector at one end, and an output coupler (a partially reflecting mirror) at the output end.[3]

The CO2 laser can be constructed to have continuous wave (CW) powers between milliwatts (mW) and hundreds of kilowatts (kW).[4] It is also very easy to actively Q-switch a CO2 laser by means of a rotating mirror or an electro-optic switch, giving rise to Q-switched peak powers of up to gigawatts (GW).[5]

Because the laser transitions are actually on vibration-rotation bands of a linear triatomic molecule, the rotational structure of the P and R bands can be selected by a tuning element in the laser cavity. Prisms are not practical as tuning elements because most media that transmit in the mid-infrared absorb or scatter some of the light, so the frequency tuning element is almost always a diffraction grating. By rotating the diffraction grating, a particular rotational line of the vibrational transition can be selected. The finest frequency selection may also be obtained through the use of an etalon. In practice, together with isotopic substitution, this means that a continuous comb of frequencies separated by around 1 cm−1 (30 GHz) can be used that extend from 880 to 1090 cm−1. Such "line-tuneable" carbon dioxide lasers[6] are principally of interest in research applications.

One facet of output wavelength is due to the particular isotopes contained in the carbon dioxide molecule. Since various combinations of isotopes can produce wavelengths from 8.98 to 10.2 μm, precision laser fabricators must take this factor into account when selecting the gas for their products. The table below illustrates the output range from nine possible isotope combinations:[2] 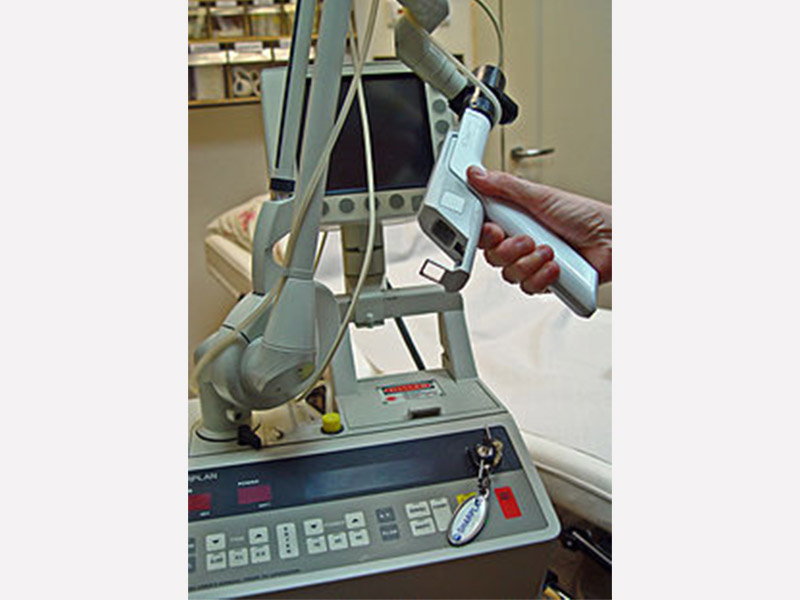 Because of the high power levels available (combined with reasonable cost for the laser), CO2 lasers are frequently used in industrial applications for cutting and welding, while lower power level lasers are used for engraving.[7] It is also used in the additive manufacturing process of Selective laser sintering (SLS).

Carbon dioxide lasers have become useful in surgical procedures because water (which makes up most biological tissue) absorbs this frequency of light very well. Some examples of medical uses are laser surgery and skin resurfacing("laser facelifts", which essentially consist of vaporizing the skin to promote collagen formation).[8] CO2 lasers may be used to treat certain skin conditions such as hirsuties papillaris genitalis by removing bumps or podules. CO2 lasers can be used to remove vocal fold lesions,[9] such as vocal fold cysts. Researchers in Israel are experimenting with using CO2 lasers to weld human tissue, as an alternative to traditional sutures.[10]

The 10.6 μm CO2 laser remains the best surgical laser for the soft tissue where both cutting and hemostasis are achieved photo-thermally (radiantly).[11][12][13][14] CO2 lasers can be used in place of a scalpel for most procedures, and are even used in places a scalpel would not be used, in delicate areas where mechanical trauma could damage the surgical site. CO2 lasers are the best suited for soft tissue procedures in human and animal specialties, as compared to other laser wavelengths. Advantages include less bleeding, shorter surgery time, less risk of infection, and less post-op swelling. Applications include gynecology, dentistry, oral and maxillofacial surgery, and many others.

The CO2 laser at the 9.25 - 9.6 μm wavelength is sometimes used in dentistry for hard-tissue ablation. The hard-tissue is ablated at temperatures as high as 5,000 °C, producing bright thermal radiation.[15]

The common plastic poly (methyl methacrylate) (PMMA) absorbs IR light in the 2.8–25 µm wavelength band, so CO2 lasers have been used in recent years for fabricating microfluidic devices from it, with channel widths of a few hundred micrometers.[16]

Because the atmosphere is quite transparent to infrared light, CO2 lasers are also used for military rangefinding using LIDAR techniques.

CO2 lasers are used in spectroscopy[17] and the Silex process to enrich uranium.

The Soviet Polyus was designed to use a megawatt carbon-dioxide laser as an in-orbit weapon to destroy SDI satellites.