The history of laser marking machines 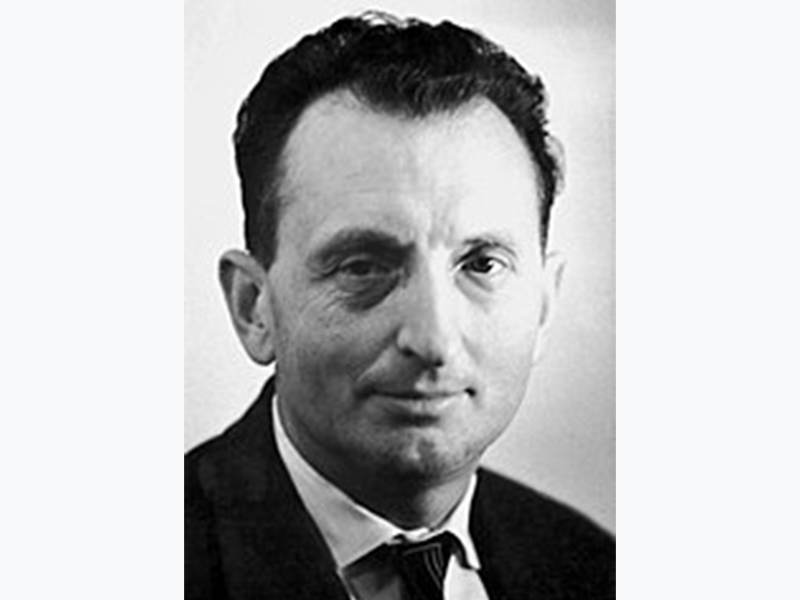 In 1951, Joseph Weber submitted a paper on using stimulated emissions to make a microwave amplifier to the June 1952 Institute of Radio Engineers Vacuum Tube Research Conference at Ottawa, Ontario, Canada.[21] After this presentation, RCAasked Weber to give a seminar on this idea, and Charles Hard Townes asked him for a copy of the paper.[22]

In 1953, Charles Hard Townes and graduate students James P. Gordon and Herbert J. Zeiger produced the first microwave amplifier, a device operating on similar principles to the laser, but amplifying microwave radiation rather than infrared or visible radiation. Townes's maser was incapable of continuous output.[23] Meanwhile, in the Soviet Union, Nikolay Basov and Aleksandr Prokhorov were independently working on the quantum oscillator and solved the problem of continuous-output systems by using more than two energy levels. These gain media could release stimulated emissions between an excited state and a lower excited state, not the ground state, facilitating the maintenance of a population inversion. In 1955, Prokhorov and Basov suggested optical pumping of a multi-level system as a method for obtaining the population inversion, later a main method of laser pumping.

Townes reports that several eminent physicists—among them Niels Bohr, John von Neumann, and Llewellyn Thomas—argued the maser violated Heisenberg's uncertainty principle and hence could not work. Others such as Isidor Rabi and Polykarp Kusch expected that it would be impractical and not worth the effort.[24] In 1964 Charles H. Townes, Nikolay Basov, and Aleksandr Prokhorov shared the Nobel Prize in Physics, "for fundamental work in the field of quantum electronics, which has led to the construction of oscillators and amplifiers based on the maser–laser principle". 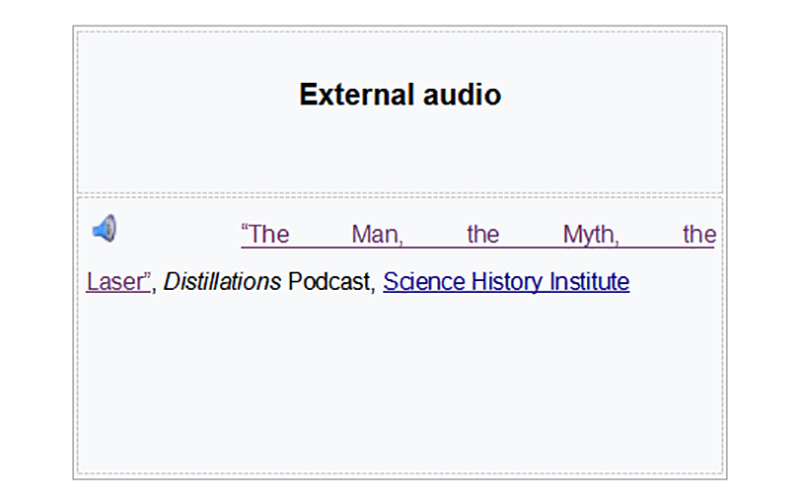 In 1957, Charles Hard Townes and Arthur Leonard Schawlow, then at Bell Labs, began a serious study of the infrared laser. As ideas developed, they abandoned infrared radiation to instead concentrate upon visible light. The concept originally was called an "optical maser". In 1958, Bell Labs filed a patent application for their proposed optical maser; and Schawlow and Townes submitted a manuscript of their theoretical calculations to the Physical Review, published that year in Volume 112, Issue No. 6. 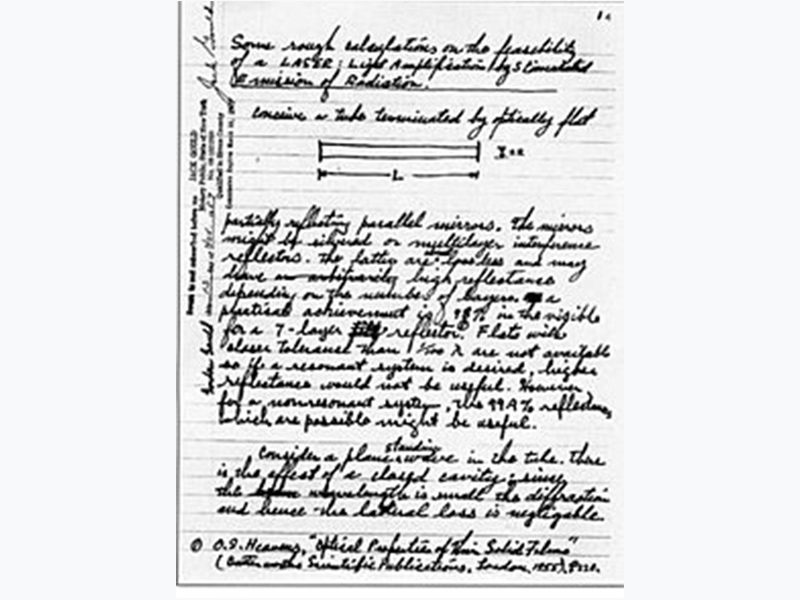 LASER notebook: First page of the notebook wherein Gordon Gouldcoined the LASER acronym, and described the elements for constructing the device.

Simultaneously, at Columbia University, graduate student Gordon Gould was working on a doctoral thesis about the energy levels of excited thallium. When Gould and Townes met, they spoke of radiation emission, as a general subject; afterwards, in November 1957, Gould noted his ideas for a "laser", including using an open resonator (later an essential laser-device component). Moreover, in 1958, Prokhorov independently proposed using an open resonator, the first published appearance (in the USSR) of this idea. Elsewhere, in the U.S., Schawlow and Townes had agreed to an open-resonator laser design – apparently unaware of Prokhorov's publications and Gould's unpublished laser work.

At a conference in 1959, Gordon Gould published the term LASER in the paper The LASER, Light Amplification by Stimulated Emission of Radiation.[1][10] Gould's linguistic intention was using the "-aser" word particle as a suffix – to accurately denote the spectrum of the light emitted by the LASER device; thus x-rays: xaser, ultraviolet: uvaser, et cetera; none established itself as a discrete term, although "raser" was briefly popular for denoting radio-frequency-emitting devices.

Gould's notes included possible applications for a laser, such as spectrometry, interferometry, radar, and nuclear fusion. He continued developing the idea, and filed a patent application in April 1959. The U.S. Patent Office denied his application, and awarded a patent to Bell Labs, in 1960. That provoked a twenty-eight-year lawsuit, featuring scientific prestige and money as the stakes. Gould won his first minor patent in 1977, yet it was not until 1987 that he won the first significant patent lawsuit victory, when a Federal judge ordered the U.S. Patent Office to issue patents to Gould for the optically pumped and the gas discharge laser devices. The question of just how to assign credit for inventing the laser remains unresolved by historians.[25]

On May 16, 1960, Theodore H. Maiman operated the first functioning laser[26][27] at Hughes Research Laboratories, Malibu, California, ahead of several research teams, including those of Townes, at Columbia University, Arthur Schawlow, at Bell Labs,[28] and Gould, at the TRG (Technical Research Group) company. Maiman's functional laser used a solid-state flashlamp-pumped synthetic ruby crystal to produce red laser light, at 694 nanometers wavelength; however, the device only was capable of pulsed operation, because of its three-level pumping design scheme. Later that year, the Iranian physicist Ali Javan, and William R. Bennett, and Donald Herriott, constructed the first gas laser, using helium and neon that was capable of continuous operation in the infrared (U.S. Patent 3,149,290); later, Javan received the Albert Einstein Award in 1993. Basov and Javan proposed the semiconductor laser diode concept. In 1962, Robert N. Hall demonstrated the first laser diode device, which was made of gallium arsenide and emitted in the near-infrared band of the spectrum at 850 nm. Later that year, Nick Holonyak, Jr. demonstrated the first semiconductor laser with a visible emission. This first semiconductor laser could only be used in pulsed-beam operation, and when cooled to liquid nitrogen temperatures (77 K). In 1970, Zhores Alferov, in the USSR, and Izuo Hayashi and Morton Panish of Bell Telephone Laboratories also independently developed room-temperature, continual-operation diode lasers, using the heterojunction structure. 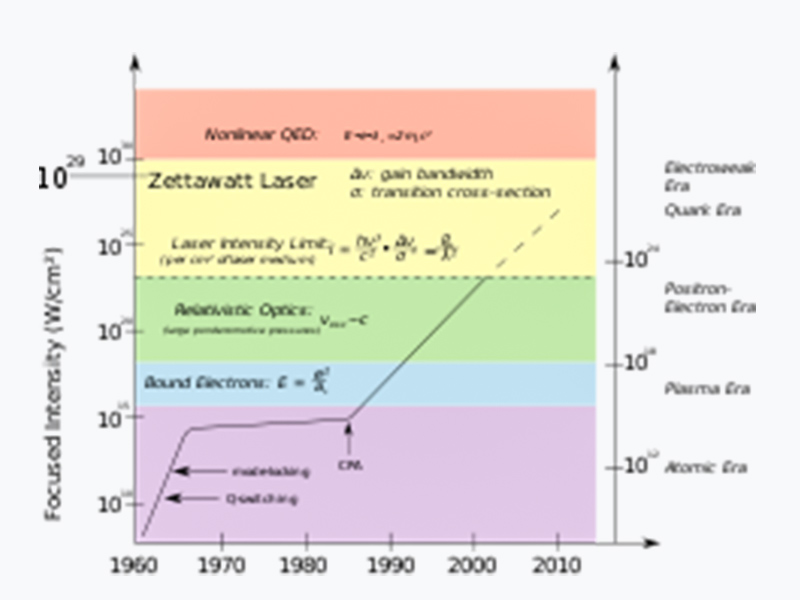 Graph showing the history of maximum laser pulse intensity throughout the past 40 years.

Since the early period of laser history, laser research has produced a variety of improved and specialized laser types, optimized for different performance goals, including:

and this research continues to this day.

In 2017, researchers at TU Delft demonstrated an AC Josephson junction microwave laser.[29] Since the laser operates in the superconducting regime, it is more stable than other semiconductor-based lasers. The device has potential for applications in quantum computing.[30] In 2017, researchers at TU Munich demonstrated the smallest mode locking laser capable of emitting pairs of phase-locked picosecond laser pulses with a repetition frequency up to 200 GHz.[16]

In 2017, researchers from the Physikalisch-Technische Bundesanstalt (PTB), together with US researchers from JILA, a joint institute of the National Institute of Standards and Technology (NIST) and the University of Colorado Boulder, established a new world record by developing an erbium-doped fiber laser with a linewidth of only 10 millihertz.[31][32]